Titivillus 1.1 adds proofing capabilities for Latin and Ancient Greek to Microsoft Word on Microsoft Windows. It not only flags out possible mistakes, but also gives you suggestions for possible corrections and allows you to add entries to a personal dictionary. Titivillus is free of charge.

isiXhosa [or: Xhosa] is Latin

isiZulu [or: Zulu/Zoulou] is Ancient Greek

So, if you wish to type in Latin, change to isiXhosa and start typing. Or if you wish to spellcheck an existing paragraph in Ancient Greek, highlight it and select isiZulu.

In some older Word version, you won’t find isiXhosa or isiZulu, but rather Xhosa and Zulu [or, if French, Zoulou]. Don’t worry, it’s the same thing: Xhosa is Latin, Zulu is Greek.

If you’re interested in ancient Latin, you will probably not need the other options (which however are extremely important for anyone working on Medieval Latin). Important: if you changed the options, it’s best to reboot to activate them. For if any Microsoft Office program stays active, the spellchecker cannot be updated; and this could be, e.g. Outlook. Just reboot and you will be fine. 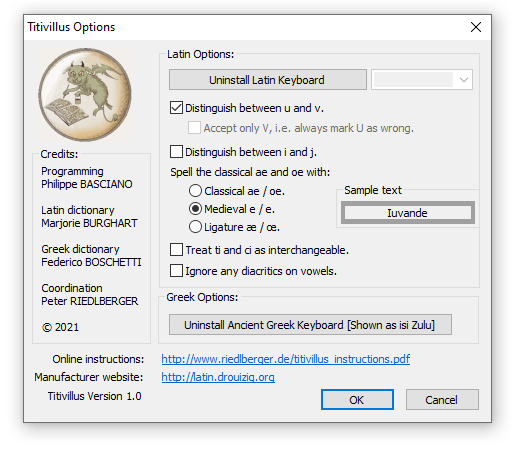 The Latin part of Titivillus (which is actually a retake of COL) is technically mature; there shouldn’t be any problems. Clearly, not every word can be known, but the number of unknowns is minimal.

The Greek part of Titivillus will more often flag out correctly spelt words wrongly as misspelt, because the underlying dictionary is not as complete as the Latin one. Later versions will hopefully amend this situation, but the spellchecker is already extremely powerful in its present state, so it makes sense to release it.

In addition to this, the Greek part doesn’t know any grammar rules. So ἀπὸ εἰσίν and οἱ δέ περιττοὶ would be accepted as correct. After all, each and every of these words can appear, even if never in this sequence. In other words: final acute or gravis and the accentuation of enclitics remain your own responsibility, at least for now.

There is a further limitation to the Greek part that will affect only some users: Microsoft Word has the disingenuous habit to automatically change to other proofing languages based on the keyboard layout you are using. This is not a problem with Latin: you change from proofing in your native language such as French, English, Italian or German to isi Xhosa and back again at will, and Microsoft Word will not interfere.

If you input Ancient Greek with a tool like MultiKey ( www.oeaw.ac.at/kal/multikey ), you will also be fine regarding Ancient Greek: you change to isi Zulu and back again, and Microsoft Word will stay well-behaved.

Nothing can be done about that. Your options are either to change your inputting habits (i.e., using MultiKey instead of the Polytonic Greek keyboard layout) or to apply proofing only later, i.e. you type, all gets underlined in red, then you highlight the paragraph and select “isi Zulu.” I actually find MultiKey a lot easier than the Polytonic Greek keyboard, as the layout matches betacode key which any Classicist must know to use anyway.

4 Why isi Xhosa and isi Zulu?

Attentive Microsoft Word users may have discovered that Word’s language list contains Latin and Greek. Why not use these entries?

Greek is Modern Greek. If Greek were overwritten with “Ancient Greek,” Greek-speaking users could no longer spellcheck their native language.

Latin is actually overwritten. You could, theoretically, use it instead of “isi Xhosa.” But please, don’t do it, as the proofing language won’t stick. Type one word, and you’re back to French or German or whatever is your keyboard layout. Just use isi Xhosa, and you won’t encounter this problem.

Also, note that the list of languages in Word cannot be expanded. It is completely fixed. One cannot add (e.g.) “Ancient Greek,” one can only overwrite any one of the existing languages.

For the time being, there won’t be a MacOS version of Titivillus because of the substantial time and effort which would be necessary.

Your options are to spellcheck your manuscript authored on a Mac on a Windows computer. Or to use LibreOffice (or OpenOffice) on a Mac for which you can download dictionaries:

Note: there is no support for these dictionaries. Also, you will have better results if you use Titivillus on Microsoft Windows, because several improvements (especially for the Greek) have been introduced.

It’s closed source because in order to gain access to Office proofing, you need to be vetted by Microsoft and sign an NDA. This means that Philippe is the only person who can have access the Titivillus code.

7 I encountered a problem during installation

Please de-install each and every of these programs which you find in your Control Panel / Software section (most probably, you will only find two of them, but please check carefully that all are removed):

8 I encountered a problem while using the spellchecker

The spellchecker is working mostly correct, but marks some correct words as mistaken. This can happen with any spellchecker, sorry about that.

If yes, your problem has nothing to do with Titivillus . Typically, proofing has been activated (the little checkbox in the dialog window, cf. the explanation in the PDF). Or there are too many spelling mistakes in one document. Then, Microsoft Word capitulates completely and permanently stops proofing for that document. Copy/paste individual pages from such huge documents and spellcheck them separately. Sorry about that.

If no, send an e-mail to Cette adresse e-mail est protégée contre les robots spammeurs. Vous devez activer le JavaScript pour la visualiser. and include as much details as possible about your problem. 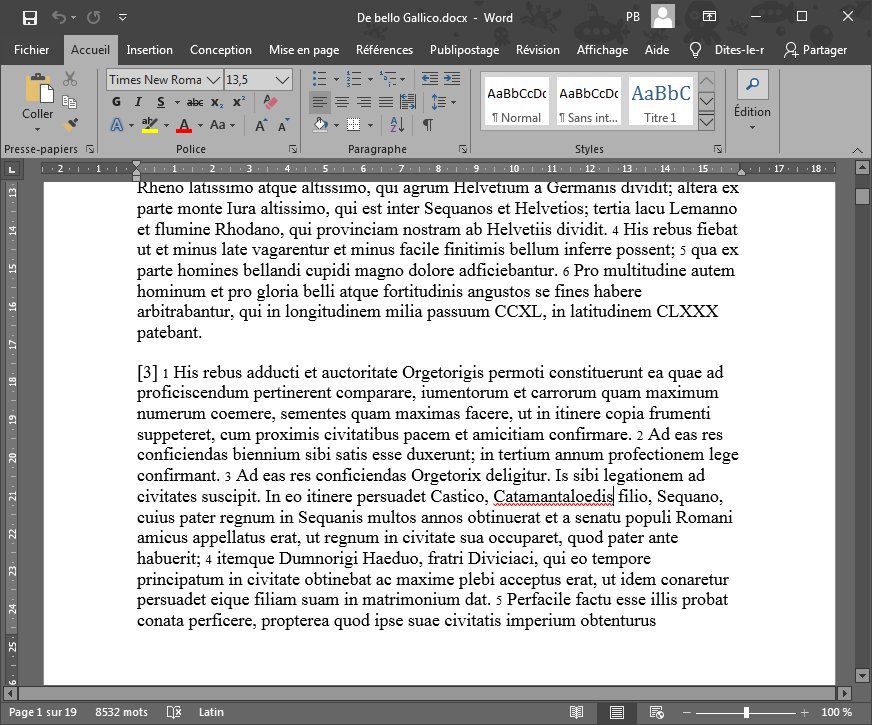